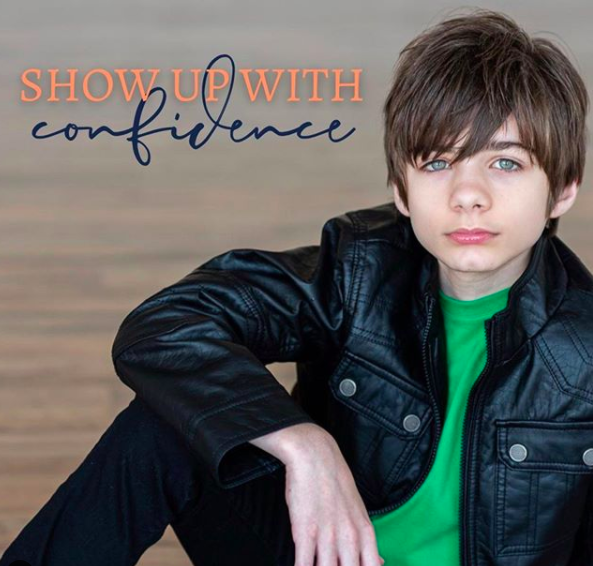 My name is Brayden Eaton, I’m a 13 year old actor that is based in Los Angeles, CA. I am originally from Detroit, MI, and I have been a professional actor now for 3 years. Since I was 5 years old, I had begged my parents to become an actor. Being the good parents they are, they made me wait until they knew I was really serious, which was when I turned 10 years old. They allowed me to do local stuff like musicals and local commercials, but I wanted to do more. I knew this is what I wanted to do for the rest of my life. It wasn’t a hobby, it’s something I loved to do, so much so, I wanted it to be my job. I’m excited to be sharing my story with you today as an example that no matter your age, if you believe in yourself while pursuing your dreams and you work hard enough, you can make them happen.

KiDS NEWS & REViEWS: Thank you Brayden for taking the time to do this interview! You are such an inspiration to us and we’re so excited to introduce you to our young followers who I suspect, will be seeing much more of you on many screens over the years! So how did you get started acting professionally?

BRAYDEN: My dad first signed me up with a local agency in Detroit, and I also started taking acting classes. But in Michigan, the film industry wasn’t very strong anymore, and there weren’t very many professional acting jobs left. So my dad called an actor friend of his in LA, who introduced me to my current manager, Dolores Cantu. She liked my stuff and signed me almost immediately. From there, she got me signed with a LA talent agency.

KiDS NEWS & REViEWS: Congratulations – sounds like you have some acting chops there! Do you do a lot of auditions?

BRAYDEN: Oh, yes! Especially when it’s episodic or pilot seasons. That’s when all the studios are trying out new shows or hiring for shows that are already going. During those times I can have up to 3-4 auditions a week! It’s a lot of work memorizing all those scripts and filming. Most people think you don’t have to audition much, but really, I audition about a hundred times before booking something. That’s not exaggerating either.

KiDS NEWS & REViEWS: Wow! So that’s a lot of work, and rejection. How do you deal with it?

BRAYDEN: It’s all a part of the business. It’s not personal. I have gone all the way to high level producer sessions with studios like Disney, where it’s been between me and another kid, and I didn’t get the part. Sometimes it comes down to your look, your eye colour, your ethnicity, you just never know. You have to look at it as a success to get that far in the audition process.

KiDS NEWS & REViEWS: Absolutely – it’s amazing actually! That’s a great perspective Brayden. So tell us what have you booked/filmed since you started?

BRAYDEN: I have been in, or have been booked for 8 different films (most of which aren’t out yet), a lot of commercials, and a couple of industrials (promos for businesses). I have a Christmas tv film coming out this December on network television. Most of the other films are still in process, the pandemic has stopped a lot of production. So we will finish/start filming those when everything is opened back up. A lot of the films I play a kid who has something different about him, there is a conflict or problem that he has to go through. One film I get to have super natural powers! I can’t wait for that one! Another film I play a kid who is deaf, and has been hidden away from the world by his grandpa, who is trying to protect him.

KiDS NEWS & REViEWS: That’s great Brayden. Sounds like you get to play a lot of different kinds of roles?

BRAYDEN: That’s why I love acting! I get to play just about every kind of person. When I was five, I wanted to be everything, a firefighter, a cop, a doctor, an astronaut, you name it, I wanted to be it. Then I heard about acting and being able to do ALL of those jobs! I love my job!

KiDS NEWS & REViEWS: Wow! So you really see yourself doing this your entire life?

BRAYDEN: Oh yes. I can’t see me doing anything else. Being able to tell the stories of so many different people is the best thing in the world I can think of doing!

KiDS NEWS & REViEWS: Amazing! What message would you like to leave with our readers?

BRAYDEN: Don’t let anyone step on your dreams. Don’t let anyone tell you that you’re too young. Be prepared to work really hard though. And be prepared to make some sacrifices. I have missed out on some things because of acting. I have to go to online school to make my schedule work. So I miss my friends, a lot. I mean, I get to see them, just not as much. I have missed parties, and going places with my friends because I have been filming or had an audition. But if you really want your dreams, it’s going to take work, a lot of work. And if you keep working hard you will find success.

KiDS NEWS & REViEWS: Where can our readers follow you?

BRAYDEN: Oh, I’m on Instragram at @braydeneatonofficial and Twitter at @brayden_eaton, and I also have a Facebook Page . I’m also on IMDb, that’s where you follow all the actors and learn about all the shows and movies they have been in.

KiDS NEWS & REViEWS: Thanks for your time Brayden, we look forward to seeing your films and shows!

BRAYDEN: Thank you for the interview, this was fun!

After speaking with Brayden we were able to connect with the Director of a feature film that Brayden recently starred in! The film is called Dinosaur Cove and you can learn all about it at @dinosaurcovemovie.

“Brayden Eaton is a very talented young artist. He knows his stuff and he is great to work with. I see big projects in his future. One day, I will be telling people that I directed Brayden in a movie before he was a big star. Directing Brayden in the movie “Dinosaur Cove” was a great experience!

Daniel Knudsen, Director/Actor of Crystal Creek Media, is most well known for starring alongside former Superman, actor Dean Cain, in the movie SkyDog.

Make sure you don’t miss Brayden’s performance as the star in the family movie, Dinosaur Cove. He plays a young boy named Riley who believes he has discovered dinosaur eggs in a nest near his grandfather’s oceanfront home. Riley has his work cut out for him as no one believes what he has discovered. All the while, he’s racing against time to have others see the truth before a crazy scientist catches up to him and the dinosaur eggs that Riley is trying to protect. Check this out at @dinosaurcovemovie

A DAY IN THE LIFE with Sparx Studio

If I Wear A Mask – by Paridice Music

KIDS CAN SAVE ANIMALS

WE CAN BE HEROES

IN MY DAUGHTER’S EYES