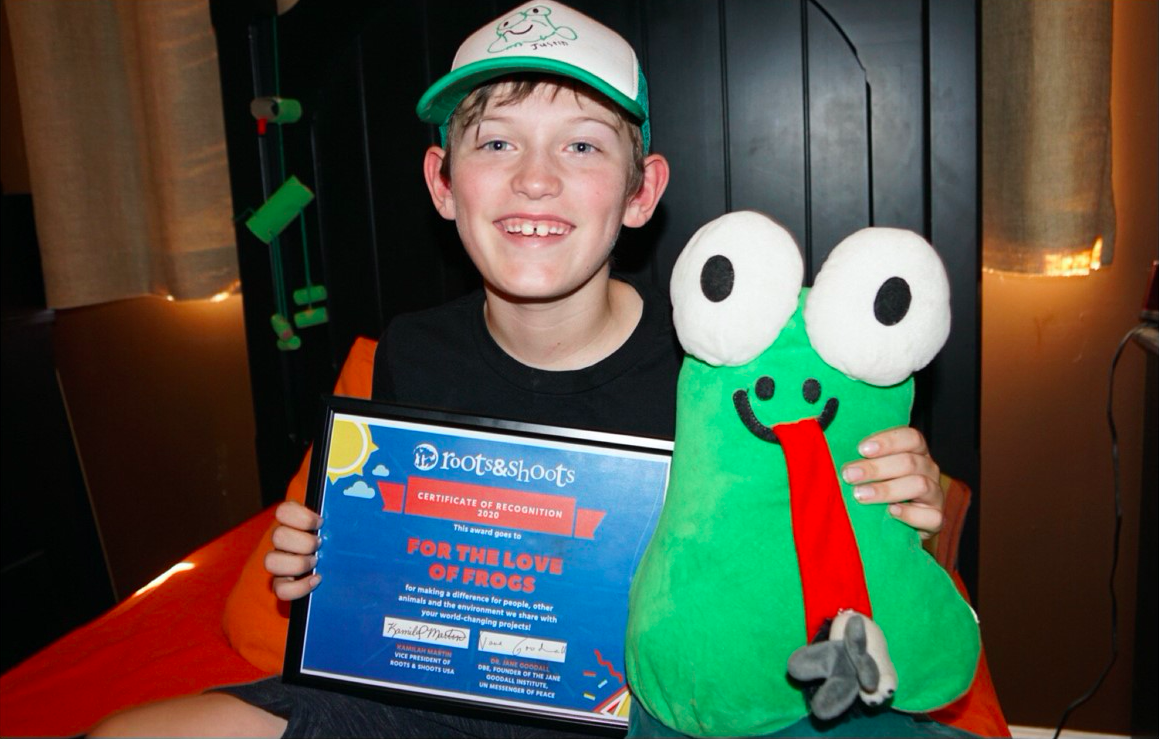 My name is Justin Sather. I am 10 years old and I live in Los Angeles, California. Frogs are my favourite animal. I know a lot about frogs. Frogs are amphibians. They live on land and in water. There are over 5,000 different types of frogs that live around the world. I also know that frogs need our help.

In Kindergarten I learned that frog populations are on the decline. Herpetologists discovered one-third of amphibian species are disappearing all over the world. They are shocked that so many frogs are dying. Frogs are indicator species. They breath and drink through their skin and this makes them sensitive to the environment. Sick frogs are telling us that the planet needs our help. Frogs have been alive for thousands of years. It made me sad to hear that frogs could go extinct. Frogs are interesting animals. It’s amazing that frogs start off as tadpoles. Also, I like all the bright coloured frogs. My favourite frogs are strawberry dart frogs, mossy, frogs, and the glass frog. All these frogs make the world more magical! My goal is to tell the world about the frogs. I want people to know frogs are telling us the planet needs our help. I want to teach people to take take of our planet. I started to sell toy frogs to my friends, family, classmates and neighbours, to raise awareness.

My Mom read me a book that inspired me to help the frogs. The book was called, What Do You Do With An Idea? The story is about a boy who has an idea. He learned to be brave and then changed the world. My Mom told me that she could help me with my idea to help the frogs and that is how my frog project started.

Next, I worked with PLAE Shoes and made frog shoes to raise thousands of dollars! I donated the money to Save The Frogs Non Profit. Together, we built wetlands and had a world-wide art contest about frogs and pollution. My idea started growing and people wanted to learn more! My message grew bigger! I made Youtube videos to share my message. GoFundMe awarded me as one of their 100 Kid Heroes! Then The Long Beach Aquarium chose me to receive their 2018 Young Hero Award! I was also featured in Bravery Magazine. Then I was awarded The Green Difference Award in 2019. I even flew to San Fransisco to meet Dr. Jane Goodall. Big Life Journal also made a cartoon about my love for frogs and cleaning the environment. Now I even talk about frogs, water quality and plastic pollution on podcasts and radio shows in efforts to clean up the planet!

GoFundMe has helped me a lot with my accomplishments. I bought hundreds of gloves from the Ballona Wetland near my house. I had my 8th birthday at the wetlands too! We picked weeds, talked about pollution, and Dr. Jane Goodall taught me about plastic pollution. She said, “There is only a small window of time to help our planet.” I started to study more about plastic and ways to reduce it.

I bought $2,000. worth of reusable plastic bags. I recycled thousands of plastic bottles, and when I learned that trash be turned into treasures, it was just like magic!

Other kids around the world had ideas too. I was excited to hear how others were turning trash into treasures. I wrote them letters and met with many of them. A girl named Shalise from Australia made bracelets out of fishing line. A boy named Ryan taught me how to use the recycling machine, and a girl named Sammie asked me to make a buddy bench out of recycled plastic caps. It took me 7 months to collect 200 pounds of caps. Then one of my babysitters told me about precious plastic machines. Now I can turn trash into treasures in my own garage – that’s when things got really exciting! Plastic is precious, and GoFundMe helped me raise money for my own precious plastic recycling machines! I have a shredder and a compression oven. Now I can turn plastic caps into cool things. My first project is turning caps into bowls. First, we collected caps from our friends and neighbours. Next, we shredded the plastic and then melted them into lots of colourful bowls. The precious plastic philosophy is to teach people that plastic is precious – it encourages us to use less plastic to help the planet.

On Earth Day, 2019, I received a message all the way from Africa. A college student, Perise Forbi, reached out to me for help. He wanted me to help him turn his trash into treasures in Cameroon. His town had thousands of plastic bottles that were dumped illegally. I wanted to help Perise clean up because he has no access to nearby recycling. I started to enquire about how we could recycle his bottles into art and other useful things and ideas came in to me from around the world. People were surprised to see all the plastic pollution in Africa. They wanted to help. Ideas came from Cameroon, Canada, Nigeria, Kenya, Tanzania, and other places. Together, we started to help Perise turn his 8,000 bottles into treasures. It was a lot of work. My family and friends helped me inspire Perise and we tried our ideas right here in Los Angeles too. Together, we made flower planters, cap art, plastic bottle animals, and even a chair. Other people started to notice and wanted to join in too. Together, we learned that plastic pollution and illegal dumping was happening in other countries too, so we started the Parallel Projects Campaign. The Parallel Projects Campaign teaches people about plastic pollution. My idea grew bigger. More people learned about the frogs and the dangers of pollution. More people around the world started turning trash into treasures. Grades of Green gave me an International Change Maker Award. Reserva saw all my work and asked me to join their Youth Council to help protect frogs and the rainforests. I also won a Roots To Shoots Grant to write my own newspaper.

My project has taught me many things. I learned to be brave and to stay determined. I also learned it is special to be unique. I know one idea can change the world. My idea keeps growing bigger. It started out with just me wanting to save the frogs. Now people from all around the world want to clean up the planet with me. Together, we can change the world!

Justin continues to inspire and educate youth about protecting our planet.  He wants other children around the world to take care of the planet just as he is doing for his love of frogs. You can join Justin’s initiatives at GoFundMe. You can follow him and his causes at @the.parallel.projects and @justinsfrogproject

A DAY IN THE LIFE AT WASATCH NATURE SCHOOL

Music lives on in the minds and...

A DAY IN THE LIFE AT WASATCH...

MOVIE REVIEW, A WRINKLE IN TIME 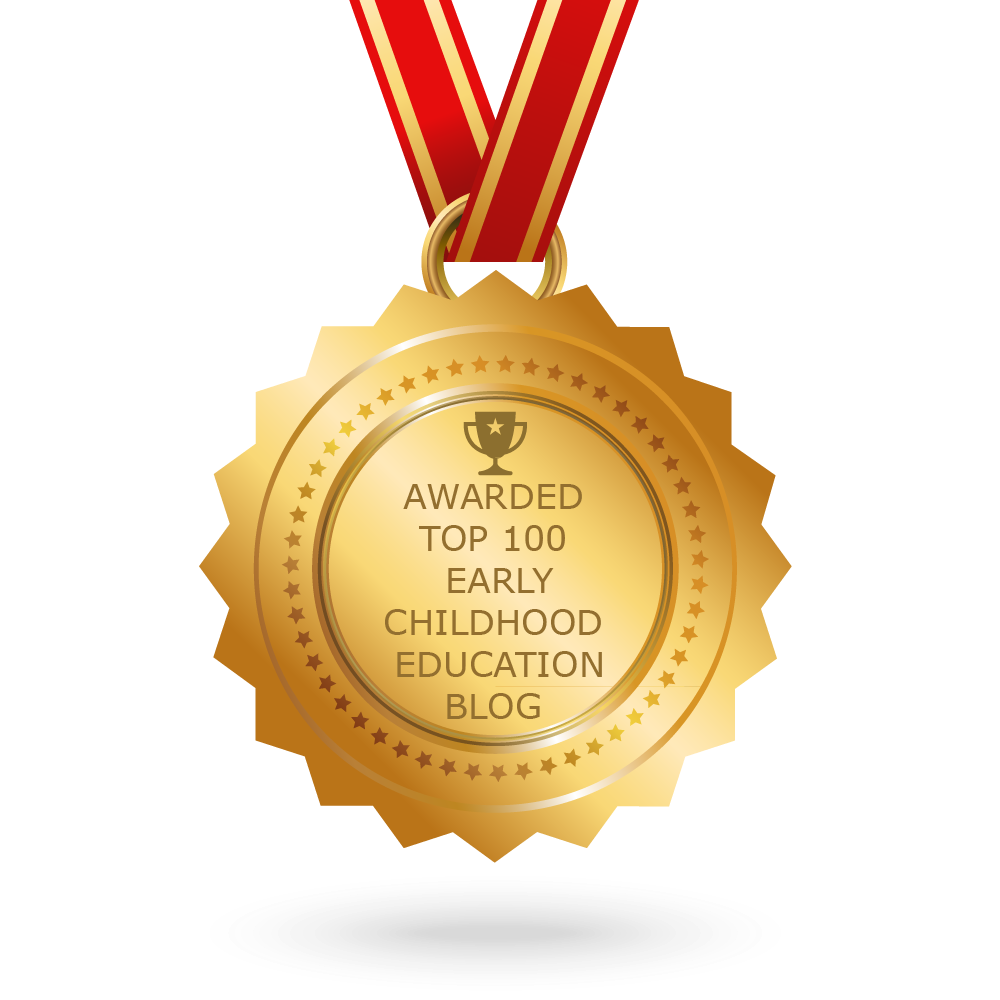